Jenica, the toy warden, is the mother of three half-Asian daughters

Violet was really cross-eyed when she was born, but that’s not uncommon. I had thought that the problem had corrected itself, but a couple months ago it seemed to come back. She looked slightly cross-eyed to me most of the time. At a check-up, her pediatrician saw the crossing and referred us to a pediatric ophthalmologist. 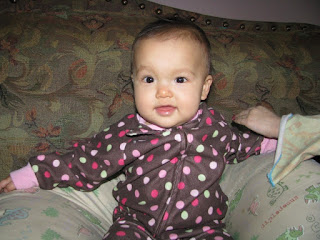 I was terrified we’d walk out of that appointment with a baby wearing glasses. As adorable as baby glasses are, I really didn’t want to deal with fighting her to keep the glasses on.

Our ophthalmologist happens to be of Korean descent, just like my husband. After he examined Violet, he pulled a picture of his own daughter out of a nearby drawer and said Violet AND his daughter have pseudoesotropia, which basically means pseudo-cross-eyed. They look cross-eyed, but they aren’t cross-eyed at all. It’s a common physical trait in Asian kids. It’s my understanding that what happens is the epicanthal fold (what makes an eye look Asian) can obscure the view of the eye and make it appear like it’s crossing when it is not.

I essentially took my child to a specialist to have her diagnosed as Asian.

When I reported the doctor’s findings to my husband, the son of Korean immigrants, he laughed and said “YOU should have known that!” as a joke. Really, he’s the one who should have known this and warned me! But he didn’t. He’s completely oblivious to most of the things I need to know as the white mother of three Asian kids. As a result, white girl me took my daughter to a specialist to get her diagnosed as having Asian eyes. “Why yes, ma’am, your Korean daughter DOES have an epicanthal fold! Good job noticing it!”

What’s sad is this is not the first time I’ve worried about a common Asian trait. When Rose was a baby, I was scared about what appeared to be a vicious bruise on her lower back. It turned out to be a Mongolian spot, which 90% of Asian children have. My husband was oblivious to this too.

And these are the things you never consider when you become the mother of biracial children. You might just take your child to the doctor to have them diagnosed as being a member of that other race. In my defense, pseudoesotropia is apparently one of the leading reasons parents take their infants to ophthalmologists! So, I’m not the only idiot running to the doctor to have their kid diagnosed as Asian.
Posted by Fizzy at 3:00 AM