Remember when I wrote about wanting to fire my cleaning guy? Well, a few days ago he quit.

He blamed it on my cat. He said his cat allergies were really bad and he was getting constant infections thanks to my cat. Thanks to the one and a half hours a day he spent cleaning my apartment every other week.  I guess it could be true, despite the fact that he never ever mentioned anything about this to me until I got to the point where it was so bad that he apparently had to quit.

In his usual style, he didn't tell me he was quitting and that he wouldn't be showing up until it was an hour before he was supposed to come. There was apparently no possible time he could've told me about this until right before.

I don't get it. He was so good when he started out. Then he gradually morphed into being completely unreliable. I still don't understand how he forgot to take the check I left for him on multiple occasions.  I gave him several opportunities to quit if he wanted, and he never took it.  You know you don't trust somebody when they tell you they couldn't show it because they were in a car accident, and you think they were lying.

Also, weirdly, he left his vacuum cleaner in our garage. Like, forever.

My husband and I disagreed over whether to change our locks.  The cleaning guy didn't offer to return our key, even though I didn't ask.  I just wanted to have the locks changed, either way. My husband said that he was the one who quit, and if we were trusting him with our key before, why wouldn't we trust him to have it now? I still wanted to change the locks.
Posted by Fizzy at 3:00 AM 13 comments:

Me: "Who is the President?"

Adorable 93-year-old patient: "Obama.  But a better question is, who is going to be the next President?"

Adorable 93-year-old patient: "Good.  Because if you weren't I'd have to ask you to leave."

At a recent meeting, it was suggested that all physicians at our hospital give out our personal cell phone numbers when patients are being discharged, and tell them to call us with any issues.  This would supposedly improve patient satisfaction.  The medical director said he'd been doing this for years and had only gotten "like two calls ever."

The response was overwhelmingly, "Hell no."

I know of several physicians who have given out their cell to a patient and been harassed for years.  But apparently, doctors giving out their cell numbers is a thing now.

My older daughter's latest thing is accusing me of not being genuine.  Like, she got angry at me because she showed me her drawing and she felt that my "oooh" sounded phony.  Well, it was kind of phony.  But what the hell was I supposed to do?  It was a drawing of a cat.

Mel: "You know what? My teacher was telling us about how if the whole class does really well on the spelling test, we're going to get to have a party next week."

Mel: "You weren't listening to me!"

Me: "You said your teacher was telling you about how if the whole class does well on the spelling test, you're going to get to have a party next week."

Mel: "I said if we do really well on the spelling test."

Me: "Ugh!  I was obviously listening."

Mel: "No, you weren't.  You were just repeating back what I said."

Aaaaaand that was the end of that argument.
Posted by Fizzy at 3:00 AM 10 comments:

A few weeks ago, I was working at a computer when I heard a strange buzzing in my ear.  At first, I thought it was a fly, but then I turned my head and saw a GINORMOUS insect buzzing around right next to my head.

The insect landed right on the computer monitor.  So obviously, I couldn't use the computer anymore.  Not until somebody (else) killed the flying terror for me.

A female physical therapist came over to me and asked if I was okay.  I explained about the giant bug on my computer and that I was basically paralyzed with fear.  The therapist then reached over and smooshed the giant bug with her hand.

If I were a man, I would have been totally emasculated.  As it was, I was a little emasculated.

This has happened before.  I think there was a jar I couldn't get open or something along those lines.  I certainly don't mind getting help with something that either frightens me or involves physical strength that I don't have, but it does make me feel slightly like a wimp when a woman helps me.

I was recently reading a NYT article about political affiliation by specialty.  It broke things down as below: 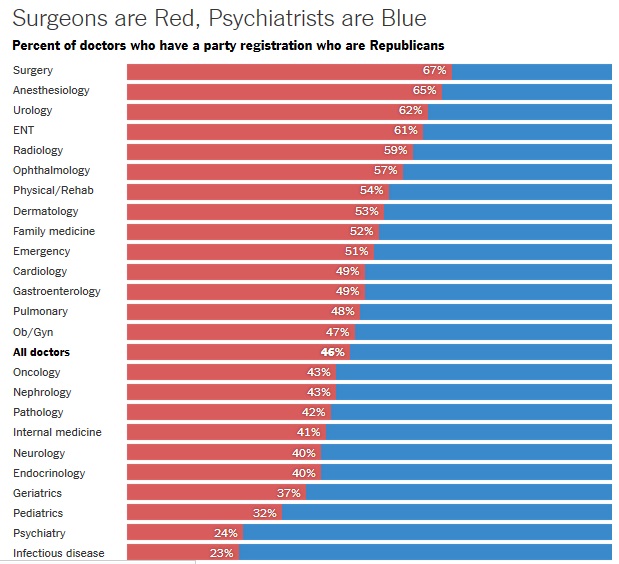 I think it's interesting that the ROAD specialties as well as Surgery are more red, whereas medical specialties are more blue.  I suppose it correlates very well with income.  It also seems to correlate well with more female-oriented specialties.

Some things don't entirely make sense to me though.  Why are ID docs so liberal?  And why are Family Med docs more red than blue?
Posted by Fizzy at 3:00 AM 10 comments:

I try not to get TOO political on this blog, but what the hell, it's my blog and I can write about what I want...

When I first heard Trump's comments with Billy Bush, I was more amused than anything.  I mean, we ALL knew this was what Trump was like... this was just verification.  And it was also amusing that of all the Bushes, it ended up being Billy Bush who brought Trump down.

But the more I hear people talk about this, the more angry I get.  It's a well known statistic that 25% of women are sexually assaulted by age 18.  I'm a woman and I have two daughters.  It's horrifying that it's not only acceptable to "joke" (let's assume it was a joke, although i have my doubts) about sexually assaulting a woman.  If that's "locker room talk," then locker room talk is unacceptable.  If that's a joke that it's okay to make even in private, then there's something really wrong with our society.

Whatever his other politics are, I think it's horrifying to put a man who thinks that way and talks that way up as a role model for our entire country.  What message are we sending to women?  To young people?

People keep pointing out that Bill Clinton did it.  JFK did it.  Other politicians did it.  Well, George Washington owned slaves, so does that make it okay? What Bill Clinton did wasn't okay and what Trump said (and likely did) isn't okay either.  We need to move away from that, not repeat the same mistakes.

A lot of people in this country don't respect women.  This is part of why we get paid less for doing the same job.  And why so many women get sexually harassed and assaulted, and a lot of the time don't/can't even say anything about it.  Because it's so acceptable.

Sexually assaulting a woman should be something that a man should be deeply ashamed to joke about, even in a "locker room" situation (whatever that means).  The fact that Trump is clearly not ashamed, in spite of his bogus apology, is deeply troubling, as is the fact that so many people don't think he should be ashamed and simply accept that this is the way men are allowed to talk.

I get it, Hillary

The more I watch Hillary speak and debate, the more I feel kind of sympathetic towards her.  Whatever else you can say about her, Hillary is a smart woman.  But she's not a great speaker or particularly charismatic, like her husband or Obama (or HIS wife). She's not the kind of person you just automatically like. I think that if a more charismatic person were running with her same exact background, they would be killing Trump.

I get it, Hillary. I'm not charismatic either.  And while I'm not running for public office, being a doctor (at least in some fields) does require some amount of charisma.  It's hard to know that no matter how hard I try, I just can't obtain the same level of likability that some of my colleagues get to without even trying.

So I paste that same smile on my face that Hillary has through the debates and try to provide good care, and hope that it's enough to get patients to like me.

I was recently reading a discharge summary on a patient, trying to figure out what the imaging showed, and this is what it read:

"The right hip showed unspecified mild assist in nephritis and mild effusion. There was mention of lumbar spondylosis.  Imaging otherwise of the lumbar of the lumbar spine otherwise appears rather underwhelming for parasite."

I know nobody corrects their errors on these notes, but I genuinely think there is some level of mistakes that is truly detrimental to patient care.
Posted by Fizzy at 2:30 AM 1 comment:

Now that both my kids are in elementary school, I had really been looking forward to being car seat free. Unfortunately, I discovered at my last pediatrician appointment that my youngest (who is average weight) is still 10 pounds shy of the cutoff.

Gah!  This is getting ridiculous. Soon they're going to say that I have to sit in a car seat.

Recently, I had a conversation with a friend on Facebook that baffles me:

Her: "I am so excited about my son turning one!  He finally doesn't have to be rear facing anymore!"

Me: "i'm sorry to break it to you, but the recommendation is actually two years old for rear facing now."

Her: "oh, I know. He just doesn't like being rear facing."

Great. So if you're just going to do it based on what your kid likes, why are you waiting until one year? It's sort of arbitrary at that point. Just turn the damn car seat around already.
Posted by Fizzy at 3:00 AM 3 comments:

For a short time, Brain Damage will be discounted to 99 cents!  Get it now!