In the next twenty-four hours, I will be arrested for first-degree murder.

I don’t know how this could be happening. I’m not the kind of person who goes to jail for murder. I’m not. I’ve never even gotten a speeding ticket. Hell, I’ve never even jaywalked before. I’m the most law-abiding citizen who ever was.

“They have a pretty solid case against you, Abby.”

My lawyer, Robert Frisch, does not sugar coat things. I’ve only known him a short time, but I already know he’s not about handholding and gumdrops and lollipops. He has spent the last twenty minutes enumerating all the police department’s evidence against me. And when I hear it all laid out for me like that, it sounds bad. If I were some neutral third party listening to everything Frisch was saying, I’d be thinking to myself, That woman is definitely guilty. Lock her up—throw away the key.

The whole time I was listening to Frisch, my heart was thumping wildly in my chest. It actually made it a bit hard to hear him for stretches of time. To my right, my husband Sam is slumped in his chair, a glassy look in his eyes. Sam was the one who hired Frisch. He’s your best chance, Abby, he told me.

So if he can’t help me, that means I have no chance.

Frisch lets out an extended sigh and folds his arms across his chest. “You have to understand that if this goes to court, you’re going to be convicted.”

“If this goes to court?”

“I’d recommend a plea bargain,” he says. “When they arrest you—”

I imagine the police showing up at my door, snapping metal cuffs on my wrists. Reading me my rights. You have the right to remain silent. Is that something they really say in real life? I don’t want to find out.

“If they arrest me,” I correct him.

Frisch gives me a look like I’m out of my mind. He’s been a criminal attorney for nearly thirty years. One of the best. You can tell how successful he is by the leather sofa pushed up against the wall and the mahogany desk where he’s got a photo of himself shaking the hand of Barack Obama. I’ve got money, but the length of a full trial might bleed us dry.

“Second degree murder is fifteen years to life,” Frisch says. “Whereas for Murder One, you could get life without possibility of parole. If you plea down to Murder Two—”

So after taking a bit of a hiatus, I wanted to let everyone know that I have published a new novel, The Surrogate Mother: 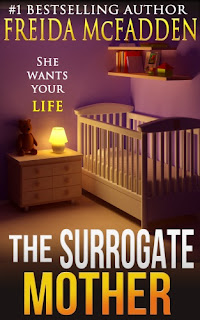 This one is a pure thriller. But it’s a thriller with a sense of humor!  I was trying to write the sort of book that you had to finish in one day because you can’t put it down. There's a name for that sort of book, but I can't remember what it is.  Unabletostopreadingable, I think.

From a discharge summary:

I was horrified to read that!  37 is NOT middle-aged!

But I also feel like for someone with a career that requires education, the 40s should be the peak of your career.  And as someone who is nearing that point, it's a lot of pressure.  Maybe it would be better to be middle-aged now...