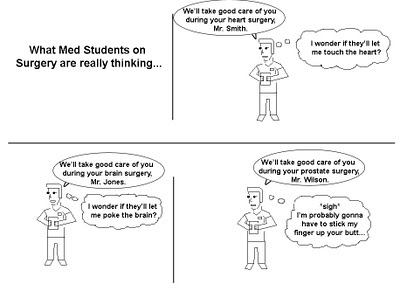 Note: This cartoon was contributed by Depakote
Posted by Fizzy at 4:57 AM 4 comments:

"Compliments" I've gotten on my age 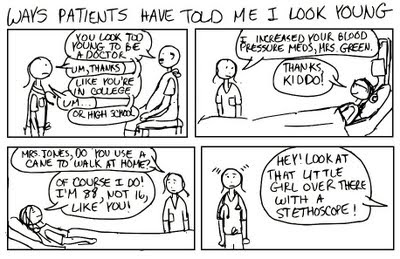 Email ThisBlogThis!Share to TwitterShare to FacebookShare to Pinterest
Labels: young 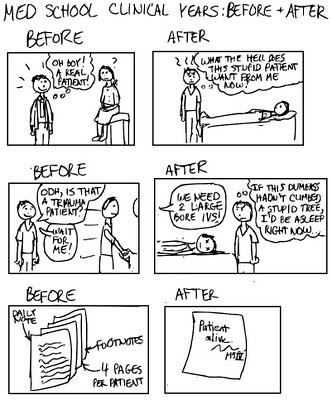 Note: This cartoon was inspired by Jess.
Posted by Fizzy at 6:22 AM 12 comments:

Email ThisBlogThis!Share to TwitterShare to FacebookShare to Pinterest
Labels: before and after, third year

I am proud and honored to be hosting this week's grand rounds. As usual, I'm going to open with a cartoon: 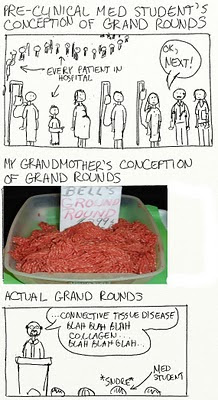 And finally, Webster's Dictionary defines "grand rounds" as nothing, because it's not even in there.

I was a little worried about what kind of posts people would submit, because I've observed some people have a questionable sense of humor. When I was in med school, I was an editor for our humor magazine and someone once submitted a copy of last year's physiology exam (although admittedly, that exam was pretty funny). Anyway, I shouldn't have worried. I think we have a good mix of the goofy, the twisted, the witty, the intellectual, and... the risque.

Shrtstormtrooper describes the prototypical ER experience of yanking a bug out of someone's ear. This happened to me during internship, but since I was at a county hospital, I had the international version: 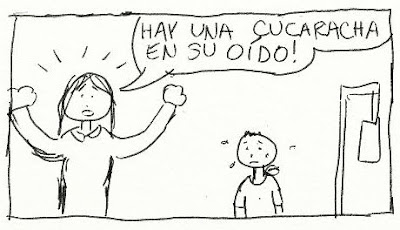 Remember how your mother told you not to eat food from the floor? But you probably did anyway? Well, Ladies' Doctor explains why you should listen to your mother. On a related note, Shadowfax also warns of the hazards of a birth control. Tell me, why are gynecological stories so hilarious?

Ugly Shoelace writes about the different types of patients, a topic that seems to be a favorite for some newbie physicians (*cough cough*). Dr. Pullen's consultant's letter that made him smile makes me recall the days of my pediatric ortho rotation, filled with toddlers who were inexplicably falling down a lot.

The Boerewors EM Chronicles recounts a frustrating patient encounter. Haven't had one of those before. Finally, Bongi's post on being blase about gunshot wounds is a very entertaining tale, even if it doesn't make you spit coffee all over your computer screen.


From Patients, With Love

There were some great humorous posts from patients. On DiabetesMine, Amy Tenderich talks about the ordeal of trying to check blood sugar on a teeny tiny countertop. This is a post about how medical equipment doesn't work as well as it should when it's not plugged in. Imagine that.

Fibroworld imagines a cartoon world in which fish could get fibromyalgia. Louise tells the story of how she avoided an urgent care visit for the all too common problem of getting a rock stuck in her kid's nose. And Dispatch From Second Base gives us an entry about breasts. 'Nuff said.

On How to Cope With Pain, there is a post about subconscious mistakes you make when you're doing too much of one field of medicine. Don't worry, it happens to all of us: 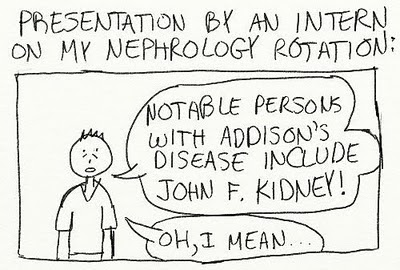 The Happy Hospitalist tackles Xtranormal video production in a post about a hospitalist dealing with the ER. Frankly, I'm not sure how Stephen Hawkings finds the time to do all these videos.

MedGadget was so overwhelmed with funny blog posts that they left to me the task of choosing one from their archives. While it may not have been the funniest post, I of course had to select their post on my absolute favorite sandwich in the world, KFC's Double Down. 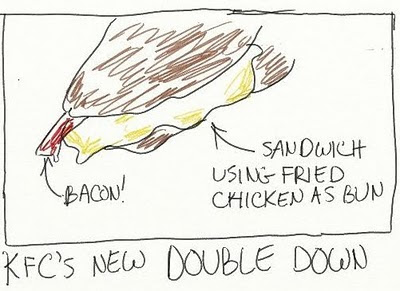 The always hilarious Michelle Au gives advice on five books to read before embarking on medical training (the books aren't funny, but she is). Dr. Rob has a great post in which a genie in a magic thumb drive grants him three wishes, although he's only able to come up with two. USE YOUR THIRD WISH TO FREE THE GENIE, DR. ROB!!! Did we learn nothing from watching Aladdin with our kids 10 million times?

Speaking of kids, there was a great post from KC of Mothers in Medicine comparing being a mother to being a clinical educator. Another MiM contributor wrote a post on what it means when your scrub drawstrings change color too often.

Oh, and um, here's a song or poem or something.

Thanks to years of cramming information into my poor brain, I now have an attention span of about five minutes. But for those of you who enjoy kicking back with a longer, meatier entry, we've got a nice selection for you. Methodical Madness presents An Ode to Semen Analysis, which is probably the longest thing you will ever read about semen. If it isn't, well... I don't know what to say. We also have Michelle R. Wood's The Cult of Intranus, which you know is going to be funny because it has "anus" in the title. Dr. Wes has a brilliant entry about needle size vs. specialty. Of course, we all know it's not length of the needle that matters, but rather, the inverse of the gauge.

Of course, no grand rounds would be complete without discussing some very important research. Dr. Grumpy keeps us up to date about some shocking effects of antidepressants, while InsureBlog educates us on the results of a groundbreaking study showing that alcohol makes people look more attractive. I am so relieved that in this time of recession, we still can find money to support this critically important research. Finally, Dr. Shock presents the results of a study that shows that clowns can help treat mental illness, thus validating the work of Patch Adams.

Whew, that was a lot.

In my original post, I promised an estimate of the number of times you will go "Ha!" while reading this grand rounds. After careful tabulation, I have determined that you will go "Ha!" exactly 1,097 times. Any less and your sense of humor just sucks.

Thanks to Nick Genes and Val Jones for promoting and organizing this forum. Next week's Grand Rounds will be hosted by A Blog Around the Clock so be sure to send in your submissions.
Posted by Fizzy at 1:07 AM 11 comments: 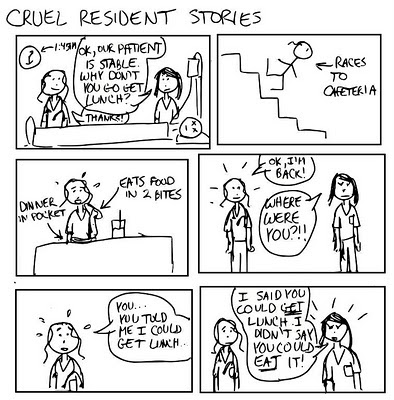 Note: All cruel resident stories are 100% true. Yes, that bitch really said that to me.
Posted by Fizzy at 7:21 AM 10 comments:

The theme, once again, is humor. Want stuff that's funny. Funny like a clown. Stuff that will amuse me, make me laugh. You get the idea.

No late submissions will be accepted. Unless you send something that's absolute comic gold, and, let's face it, we're medical professionals not comic geniuses so that's probably not going to happen.
Posted by Fizzy at 5:47 AM No comments: 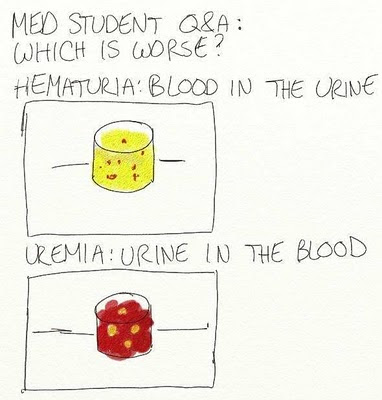 Email ThisBlogThis!Share to TwitterShare to FacebookShare to Pinterest
Labels: hematuria

Adjectives to describe a rash: a med student guide 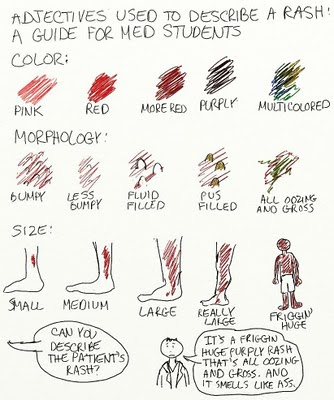 Note: Cartoon inspired by Meat, MD
Posted by Fizzy at 3:00 AM 5 comments:

Email ThisBlogThis!Share to TwitterShare to FacebookShare to Pinterest
Labels: rash

Next week, I'm going to be popping my Grand Rounds hosting cherry. My lifelong dreams have been to eat the world's largest hoagie, manage a beautiful country singer, be a monorail conductor, run out on the field during a baseball game, be a contestant on the Gong Show, own the Dallas Cowboys, and finally, to host Grand Rounds.... so you can imagine I'm pretty excited!

In keeping with the theme of my blog, next week's Grand Rounds theme will be Humor in Medicine. Please submit any blog posts that make you laugh (or are otherwise enjoyable). I will be reading these posts and keeping a tally of the number of times I go "ha!" When I host Grand Rounds, I will post the links in order of how many times each one made me go "ha!" and will provide you with a rough estimate of how many times you will go "ha!" during your reading of the blog posts. It's all quite scientific.

How to submit: Please send your entries to fizzziatrist(at)gmail.com (note the three Z's). Put Grand Rounds in the subject line, and include the URL of the post in the message with a sentence or two about the post’s topic. Please include approximately how many times you think I will go "ha!" while reading the post.

Deadline is Sunday August 22nd at 3 p.m. Eastern time. I encourage you to be a nerd and submit early!
Posted by Fizzy at 11:41 AM 5 comments:

How to pay off your kabillion dollars of crushing student debt 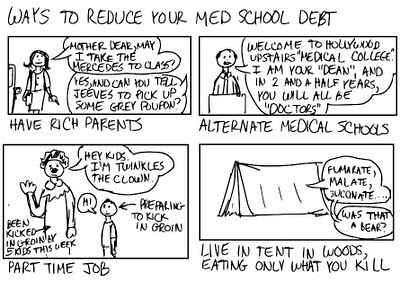 Email ThisBlogThis!Share to TwitterShare to FacebookShare to Pinterest
Labels: debt

A seating chart for morning rounds in OB/GYN: 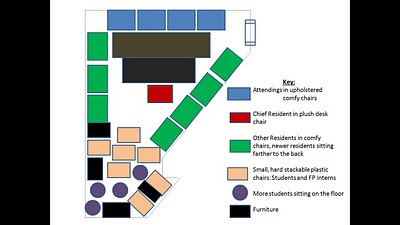 A window into the residency interviews 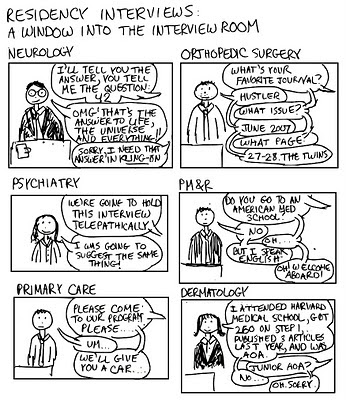 Email ThisBlogThis!Share to TwitterShare to FacebookShare to Pinterest
Labels: interview

The 10 Kinds of Patients 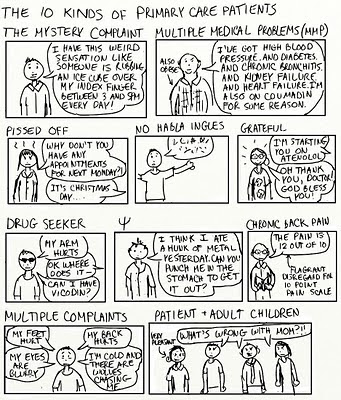 Email ThisBlogThis!Share to TwitterShare to FacebookShare to Pinterest
Labels: patients 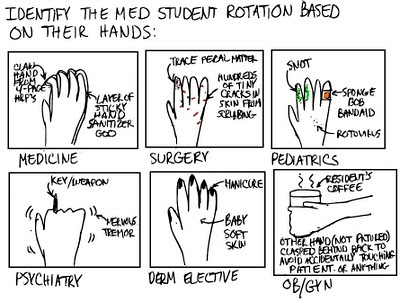 Email ThisBlogThis!Share to TwitterShare to FacebookShare to Pinterest
Labels: hand 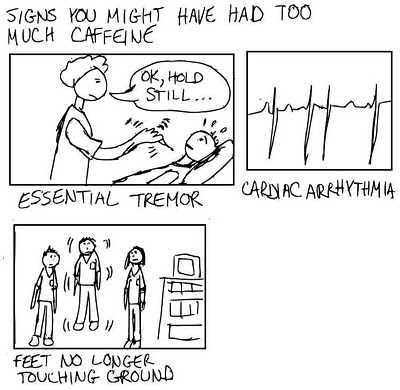 Email ThisBlogThis!Share to TwitterShare to FacebookShare to Pinterest
Labels: caffeine Note: This cartoon was contributed by Doctor Beth
Posted by Fizzy at 3:31 AM 3 comments: