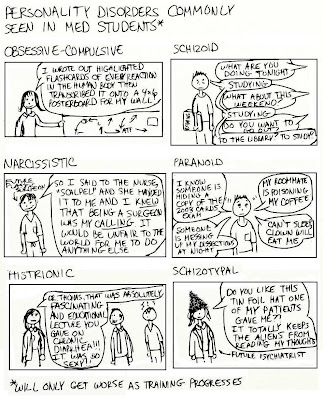 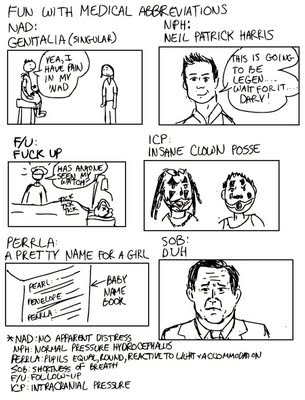 Email ThisBlogThis!Share to TwitterShare to FacebookShare to Pinterest
Labels: abbreviations

What's in your short white coat? 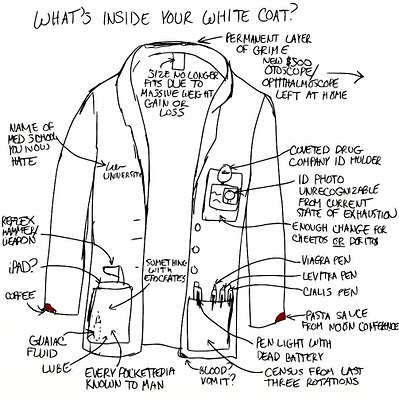 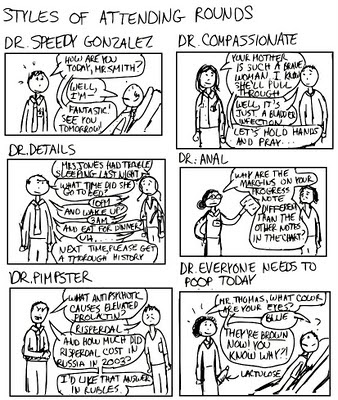 Email ThisBlogThis!Share to TwitterShare to FacebookShare to Pinterest
Labels: rounds

During my Spine rotation in residency, I had the joy of answering messages from patients. This was one of my favorites (click to enlarge):

In case you can't read it, it says that the patient is requesting a pain medication called Oxzydodole, which I can only imagine is pronounced "oxy-doodle". No such medication exists. (Also, the second scribble says the patient was too sick to show up to their appointment.)

I called the patient and asked them about it and they insisted that this was the spelling of the medication. Insisted. I told them there was no such thing as oxy-doodle. I finally looked in their chart and saw that last time we had given them a prescription for Mobic (an anti-inflammatory), so I called that in for them. (That's my handwriting, saying "Called in Mobic".)

(Yes, I know they probably meant oxycodone. But we specifically were not allowed to prescribe narcotics in that clinic for reasons that I don't have the energy to contemplate here. Possibly in order to enrage all the patients who came in.)
Posted by Fizzy at 6:54 AM 5 comments:

Email ThisBlogThis!Share to TwitterShare to FacebookShare to Pinterest
Labels: pain 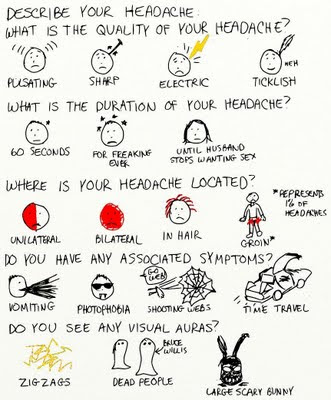 Email ThisBlogThis!Share to TwitterShare to FacebookShare to Pinterest
Labels: headache 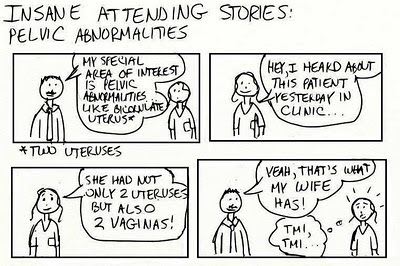 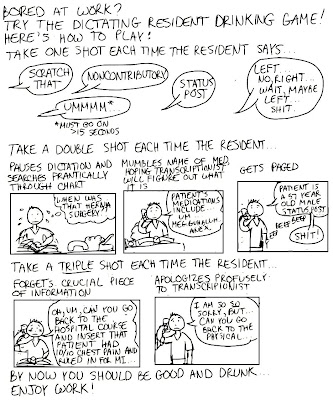 Note: Thanks to Jess for inspiration!
Posted by Fizzy at 3:51 AM 8 comments:

Email ThisBlogThis!Share to TwitterShare to FacebookShare to Pinterest
Labels: dictate 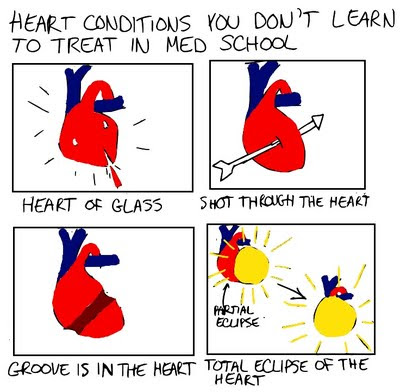 Email ThisBlogThis!Share to TwitterShare to FacebookShare to Pinterest
Labels: heart

But this blog is only for cartoons, you say. Isn't this blog called "A Cartoon Guide to Becoming a Doctor"? you say.

Well, screw you. It's my blog and I can post what I want.

We used a service that cleaned several apartments within our large complex. I went to the rental office and signed a release saying that they could have our keys for the purpose of cleaning. Today was the first time they were going to come clean and we were pretty excited. We spent hours pre-cleaning (lest the cleaning woman think we're slobs) and we locked away our rubies and the world's largest cubic zirconia in our safe. (Just kidding. Nothing we own is worth more than $20.)

When I got home from work, I expected to see a sparkling, shining apartment. I didn't. In fact, it was exactly how I left it.

A few minutes later, my phone rang. It was the woman who owned the cleaning service. Apparently (and I'm a little sketchy on the details of how this happened), they cleaned the wrong apartment. The rental office gave them some random wrong set of keys and they went and cleaned some random apartment.

While I'm kind of peeved that my apartment didn't get cleaned, I can't help but be amused when I picture some other family coming home to find their apartment inexplicably got cleaned while they were at work.

In trying to figure out how such a thing could have happened, it occured to me that there were two sets of checks that failed:

1) The rental office gave out the wrong set of keys.

2) The cleaning service went to the wrong apartment, even though they knew our apartment number.

This is why I maintain that despite the number of checks that occur in a hospital, errors are going to occur. Because people are dumb.... er, error prone. And plenty of times, exhausted residents and clueless med students are doing things without having ANY checks. (Despite the fact that med students can't write orders, they can still mix up A bed and B bed and take out staples from the abdominal incision of the woman who is post-op day 1, requiring her to go back to the OR. Yes, that happened.)

You might argue that errors are less likely when it's important, such as in a hospital, when life or limb are involved. Then again, tell that to the woman who just spent hours scrubbing someone's toilets for free.

Anyway, in case you were on the edge of your seat wondering, my apartment is going to get cleaned tomorrow.
Posted by Fizzy at 3:12 PM 8 comments: 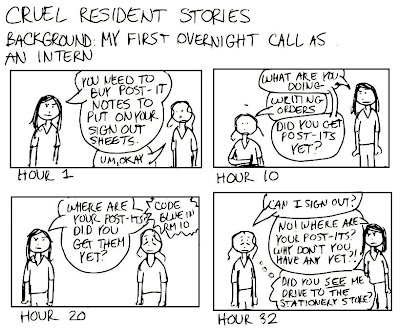 Guarantees for your first week of med school 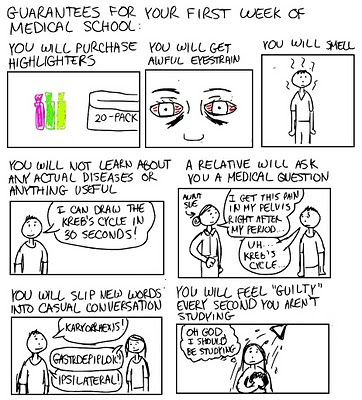 Note: This cartoon was inspired by Jess
Posted by Fizzy at 6:03 AM 15 comments:

Guest cartoon: Methods of coping with your first exam 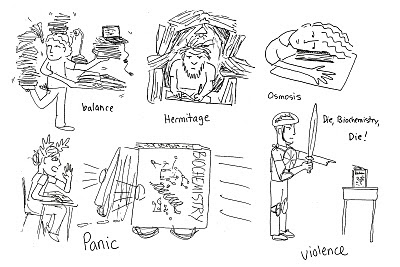 Note: Contributed by a medical student at UC Davis
Posted by Fizzy at 3:18 AM 4 comments: 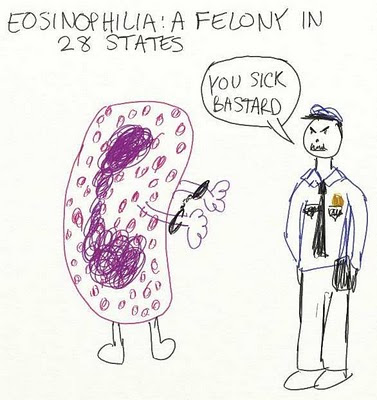