Wow, two posts in one day!

Of course, I assume everyone in the world knows I'm not a neurologist, so I thought it was sufficient to mention that med student was rotating on neurology to make clear that he wasn't my student. Apparently not. But he wasn't assigned to me and I had very little interaction with him.

Once you move on to a new level of training, you do earn the right to make fun of all lower levels. But I don't think anything gives you the right to abuse and ignore your med students. Personally, I don't take med students at all, because I feel the environment is less than ideal for learning. I promise I am not cruel to my nonexistent med students.

Asking someone you don't know to move their ass when you know they're in the way, but they're not necessarily in your way takes a special sort of person. If I saw an old lady teetering on the bus and nobody giving up their seats, I'd be pissed but probably not say something. I think it takes a sort of outspoken person to yell at a stranger for not doing the right thing for someone else. Sometimes that kind of person can be heroic. Other times they're just nosy. Other times they risk getting shot. In any case, I'm not that sort of person.
Posted by Fizzy at 12:01 PM 29 comments:

There is a med student who is rotating in neurology right now. Med students on our unit are generally super annoying because the unit is already super crowded. I've been brought to the brink of tears more than once because there was nowhere for me to sit and write notes/dictate.

So med students are not actually doing a job and they're basically just uselessly taking up space. Therefore, they annoy me.

A few days ago, I really wanted to strangle the med student though. He's been rotating with us for like a month, long enough to know how crowded it is. Yet he somehow thought it was a good idea to use the one of our only three seats as a place for him to study in the afternoon. This was studying he could have easily done ANYWHERE ELSE, including the cafeteria or his home or wherever. He was totally oblivious to the glares of all the nurses who had to stand as they did their charting.

I didn't say anything. Mostly because I was hoping someone tougher than me might tell him off and make him cry. That didn't happen though.

EDIT: Just to be clear, he wasn't MY med student. I didn't even know his name, since nobody ever bothered to introduce us.

It reminded me of a story from my intern year ER rotation, of the most clueless pre-med EVER:

His name was Jim (not his real name) and he was a college student following my ER attending during her shift. There were a lot of pre-meds shadowing attendings that month, and usually they were proficient in translating some foreign language and thus pretty helpful. But Jim was really clueless.

I had a patient who was actively miscarrying, passing huge grapefruit-sized blood clots. My attending was going to go into the room to do the pelvic exam and transvaginal ultrasound and Jim followed us in. I guess he was just trying to be helpful, but I think if you're a male it's appropriate to ask permission first before you walk into a room where a woman has her legs spread. I took him aside and said very nicely, "A lot of women feel uncomfortable having a male observe a pelvic exam, especially in this sensitive situation. I'd like to ask her first."

Jim replied, "But I have to follow the attending. I'll just stand at the other side of the room."

The room was about the size of the bathroom in my apartment and there were already too many people in the room. Instead of arguing further, I said to the woman, "Is it all right if this gentleman stays in the room."

She said it was OK, so I didn't make a big deal of it. He was, by the way, totally unhelpful during the exam because he couldn't find a freakin thing we asked him for. But whatever.

Later on, GYN came to do a D+C on the patient. They closed the curtain during the procedure but didn't close the door to the room because it was "suffocatingly hot." A nurse was screaming at them for keeping the door open, saying it was a violation of privacy, and said she was writing them up. (The patient, as far as I heard later, didn't care.)

After this incident, the GYN (who was very upset) came over to my attending and said, "Can I speak with you privately?" They went into an empty room together and shut the door behind them. And Jim tried to follow them!

I stopped him. I was like, "Jesus Christ, Jim, give them some privacy!" He tried to argue with me but quickly gave up. 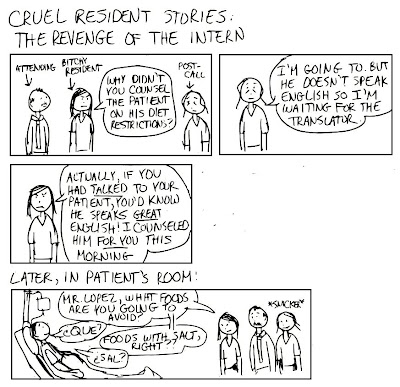 Email ThisBlogThis!Share to TwitterShare to FacebookShare to Pinterest
Labels: haiku

I got this new program to make images look a little nicer on the computer, so I went and redid my page on the anatomy lab groups. I think it looks better. So anyway, here it is, "Anatomy Lab Groups" Rebooted, starring Christian Bale as Anatomy:

(Fun Fact: When I first published this 10 billions years ago in my med school humor magazine, there were actually 14 different types of anatomy lab groups, but the 14th one was an in-joke. The cow costume is a little borderline so I kept it.)
Posted by Fizzy at 5:11 AM 2 comments:

Choosing a specialty (a true story) 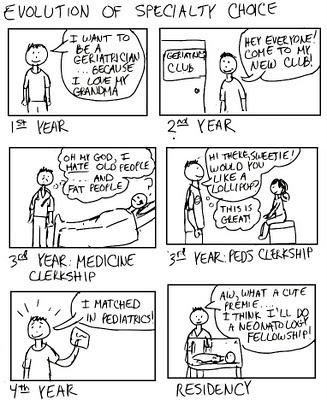 Dedicated to Jon. In your defense, premies DO kind of look like old people.
Posted by Fizzy at 5:06 AM 5 comments:

Email ThisBlogThis!Share to TwitterShare to FacebookShare to Pinterest
Labels: specialty

I get a lot of my inspiration for drawing cartoons from a journal I kept during my intern year, but I noticed there are a lot of entries that I liked, but don't really translate super well into cartoons. Or at least, I'm not talented (or too lazy) to draw them. So I'm going to do a new segment called "Tales From Intern Year" which is basically a way for me to be lazy and post stuff without actually drawing anything and writing anything new. Yay!

I'm going to commence with an all-important list I made:


10 Great Things About Being an Intern

2. You get to hear everyone's most intimate secrets, like why your 85 year old patient has a penile implant.
On second thought, I don't want to know.

3. Nurses may bring in candy. Take the candy... it could be your only opportunity to eat for the next 24 hours.

4. You get to save lives by filling out lots and lots of paperwork. Otherwise, why would you do it?

6. Earning less than minimum wage can be somewhat lucrative if you're working 100+ hours a week.

8. Sure, being an intern can be a hard life sometimes. But despite the long hours spent awake, you still feel like you're making a difference and really helping [falls asleep in the middle of heartfelt speech]

9. You get the title you've always wanted...
"What are those two letters after your name? MD? Are those your middle initials?"
"No, that's my freaking degree."

10. Opportunity to cut someone with a scalpel without accompanying long jail sentence.
Posted by Fizzy at 3:56 PM 12 comments: 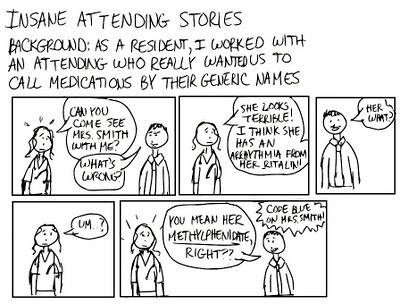 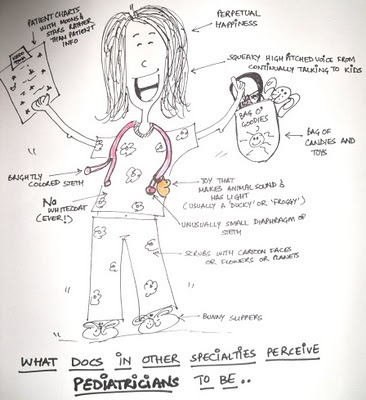 Note: Contributed by Arps
Posted by Fizzy at 3:45 AM 5 comments:

An attending's guide to clinical research 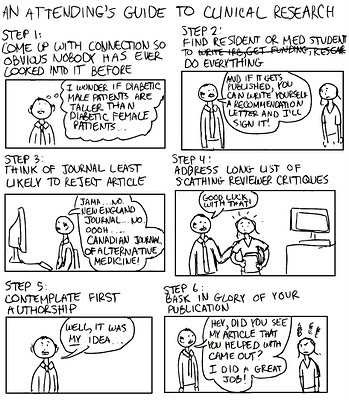 Things I learned during my training 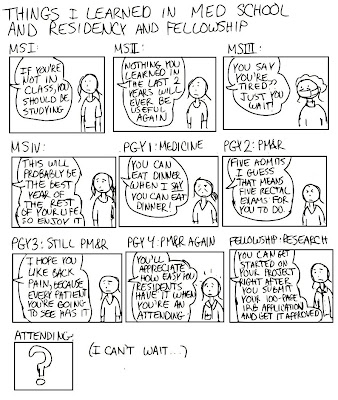 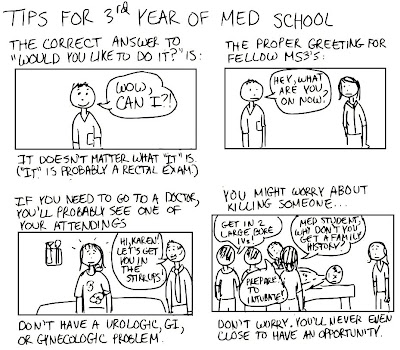 Note: Inspired by Jess
Posted by Fizzy at 3:07 AM 7 comments:

The months of Intern Year 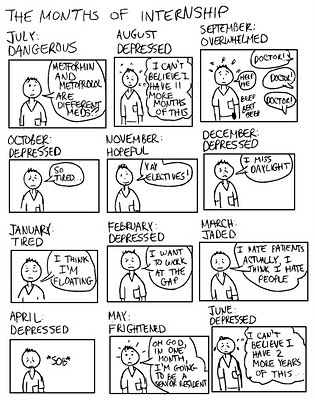