All Research is Actually Made Up: A Clinical Trial

Introduction
Since the beginning of time, people have been making things up. First, the Pilgrims made up that the earth was flat. Then Watson and Crick made up DNA. Also, dinosaurs are clearly made up.

Roughly one billion scientific studies are published yearly. It is a well known fact that people are really lazy; therefore, it would be impossible for that many people to go through the amount of work required to complete a randomized control trial. It in fact seems unlikely that even one person could complete such a trial. This provides an explanation of why there are so many contradictory results, like how one year they tell you to put your newborn to sleep on its stomach then the next you’re supposed to put it on its back, so what’s up with that?

The primary objective of this study is to prove conclusively that all research is made up. Secondary outcome measures include figuring out where all that money comes from to fund all this made up research when there’s a freaking recession going on.

Methods:
132 “researchers” were recruited for this study from various places. They were assigned to write a one page essay on whatever subject they wanted in one month’s time. Since the average Institutional Review Board (IRB) proposal for a clinical trial must be much longer than one page, the researchers’ inability to complete this much simpler task is evidence that no actual real IRB proposals ever get written. I mean, have you seen one of those things? They’re, like, ridiculous.

Results:
Of the 132 subjects recruited, there was a drop out rate of 80% for some reason. Of the subjects who remained in the study, 10 handed in a one-paragraph essay with coffee stains on it, 5 handed in a page ripped from Merck’s Manual, 5 handed in a copy of last week’s TV guide, 2 handed in a cocktail napkin with someone’s phone number on it, and 3 handed in some sort of pornographic drawing. Only one subject completed the entire page, although that essay was typed in 32 point font and was only 10 words total. And the last two of those words were “The End.”

We analyzed the data utilizing a Mann-Whitney square dance multivariable nonlinear regression analysis of variance. Using a confidence interval of 95%, all research was still made up. Also, here’s a figure: 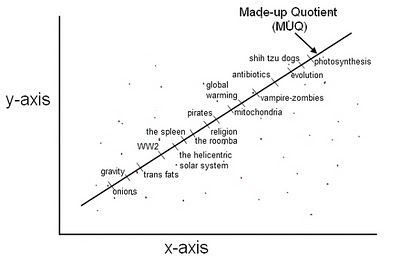 Discussion:
The inability of even one researcher to write even a single page means that obviously, all research is definitely made up. Alternately, it might be possible that there was one single real study from hundreds of years ago, probably written by Plato or Aristotle or Zeus, and all future studies were plagiarized from that first study.

Conclusion:
In conclusion, it is clear from our results that all research is actually made up. Or it would be, if we hadn’t made up all our results.
Posted by Fizzy at 7:42 PM