My husband and I were discussing computer games that used to be available when we were kids. He had Nintendo, but I had nothing, so the only games I got to play were on the computers at school.

A game they always let us play with was Oregon Trail. If you were a kid in the 80s, you must remember this game. It's a "learning game", supposed to teach us about pioneer life, so that's why we got to play it in school. I remember the goal was to lead our wagon and ox from some starting point to, presumably, Oregon. Except I never understood why the pioneers were going to Oregon. Why Oregon? Oregon sucks. Why not go to California to get gold or whatever? 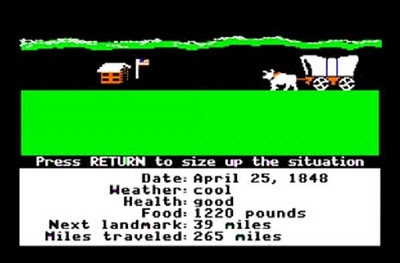 (See American flag in drawing, which teaches us that the Oregon Trail was in the US, not in like France or something.)

At the beginning of the game, you went to a store and bought a bunch of crap that you were supposed to need for your journey, like food and ox and bullets. (The game was always talking about oxen and it was only years later that I realized that oxen was the plural of ox. I was always like, "What is this weird animal called oxen?") Then you were off on your journey.

Things that could happen to you on the Oregon trail included losing half your food in a river, getting sick and losing time, or I guess other things could happen. I don't really remember. I never got very far.

Above and beyond, the best part of the game was going hunting. You got to stand in a little field with your tiny gun and use the arrow keys and space bar to shoot at animals scurrying through the field. And any animal you shot, you got to keep for food. The highlight was shooting one of those big buffalo.

In all my years of playing the Oregon Trail, I don't think I ever once finished the game. I guess it takes a long time to get to Oregon from... wherever the starting point was. There was some kind of scoring system, but since I never actually finished, I never learned how that worked or cared.

The other game we played a lot was Where in the World is Carmen Sandiego? I don't remember much about that game, other than the fact that it required you to know geography, therefore I sucked at it. Also, it was a TV show, and this kid from my class got to be on it and lost really badly.

When my father finally got a computer, my first game was this text-based game based on The Hobbit. I think it was called The Hobbit. Between me and my father, neither of us could figure out how to play. There was this whole dictionary of words you were allowed to use, but the only command I could get the game to understand was "Kill Gandolf". And once Gandolf was dead, you had no one to help you so the game was pretty much over. I'm not even sure why the game let you kill him. I guess computer games have come a long way since then.
Posted by Fizzy at 3:50 AM