This is from like a billion years ago, but I couldn't resist displaying it. Someone thought it was an appropriate wedding present to give us two million dishes. This was our attempt to put them away: 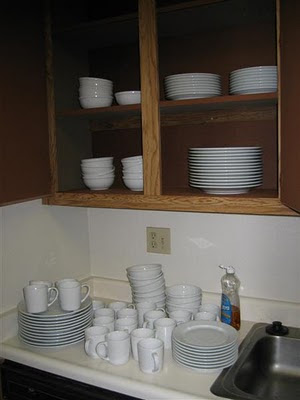 We actually had a registry but they decided they "didn't like anything" on our registry. That baffles me a little bit because isn't the present for us, so shouldn't WE be the ones who like it? Anyway, six crates worth of dishes was clearly a much better present. We calculated that we would only have to do dishes like once a month, as long as we were OK with a huge sinkful of dishes with rotting food on them.

Another annoying thing was that we didn't even end up using those cups at all. They were just too small to be useful for drinking water from, because they could only hold a few sips worth, resulting in a need for constant refills during a meal. I guess they might have been OK for hot drinks, but neither my husband nor I are coffee or tea drinkers. So I'm not sure we ever used any of those cups.

The bowls were also kind of too small. Whenever I put cereal in them, I'd end up spilling milk on myself. I like my cereal milky.

(FYI: All the dishes were either given or thrown away along with most of our belongings during a giant move.)
Posted by Fizzy at 5:28 AM