When I was a medical student, I was examining a patient who had a stroke with left neglect. As part of the exam, I showed him something I had written on a piece of paper and asked him to read it.

What the paper actually said: "CLOSE YOUR EYES"

The patient neglected the left side of the sentence and only read the last three letters, which happened to be an actual word in itself. Sort of fascinating from a neurological point of view.

I feel like this happens a lot on the internet. People will read something you write, pick out a quarter of a sentence they don't like, and freak out on you. For example, take the following cartoon I drew: 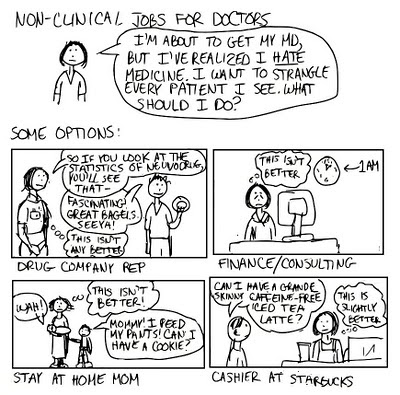 When it was posted on KevinMD, one woman got upset because she took it as offensive to stay at home moms. That in the cartoon, I was making a negative statement about SAHMs. Except I was in no way, shape, or form did I mean anything like that. I think if you read the whole cartoon and don't have a chip on your shoulder, that's completely obvious. But if you only look at that one panel and are sensitive about being a SAHM, then I can't definitely see how it might set you off.

Basically, when someone gets offended over something benign, it just makes me think less of them.
Posted by Fizzy at 2:16 AM