I used to buy all my shoes at Payless. And when I had a child, I bought all her shoes at Payless. Then in the last year or so, I noticed that every single pair of shoes I bought there had the same problem. I'll let you guess from the photo what it is: 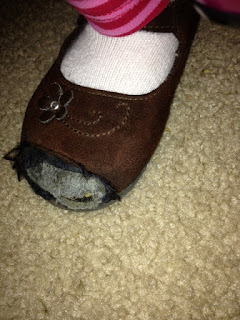 These are shoes purchased less than a month ago if you can believe that. I bought a pair of shoes for a dollar at a consignment sale that held up better than that. There was a hole I could stick my finger through.

Ordinarily, I'd just buy new shoes, but considering this had been happening faster and faster each time, I decided to go to Payless and complain and maybe even see if they'd replace the shoes. I mean, the shoes were $7 but it was the principle of the thing.

I spoke to the manager and explained the situation. She said it was my kids' fault because they drag their feet. I find it hard to believe that both my kids simultaneously developed a foot-dragging problem in the last year. But she did agree to replace them this one time. Which was sort of nice, considering I didn't have a receipt.

Unfortunately, they didn't have those shoes so I had to pick out a new pair that was more expensive. Like $14. I agreed to pay the difference. Except for some reason, the cashier said the shoes that we already had were now reduced to $3 (!) so that was all the credit they could give me since I had no receipt. I asked to speak with the manager again, but alas, she was "on the phone."

I was like, "Seriously? You're a multi-million dollar company and you're squabbling over $4??" I mean, they were probably making like $10 profit on the new shoes I was buying.

Except now where the hell do I get my kids shoes?
Posted by Fizzy at 3:00 AM