After my daughter's birthday party, I was trying to follow the tradition of handing thank you cards to the kids who came and gave her presents. Unfortunately, I discovered the school policy is that this is not allowed. (Actually, it's not so much the school as apparently the district. I got an administrator to readily admit that it was silly.) Anyway, the first time I sent my daughter to school with the cards, I received this note back from her teacher: 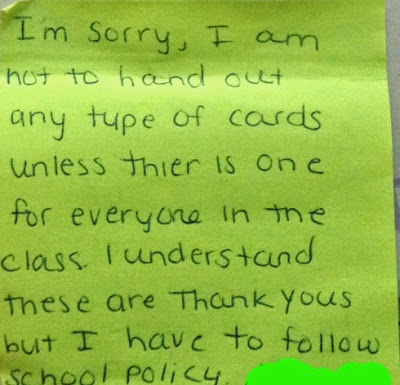 I debated if I should post this, because I really did like her teacher. But the use of "thier" just killed me. She used the wrong version of the homonym and then she spelled it wrong on top of that. This is a woman who is teaching my child to read and spell. Actually, I think that this was one of their spelling words.