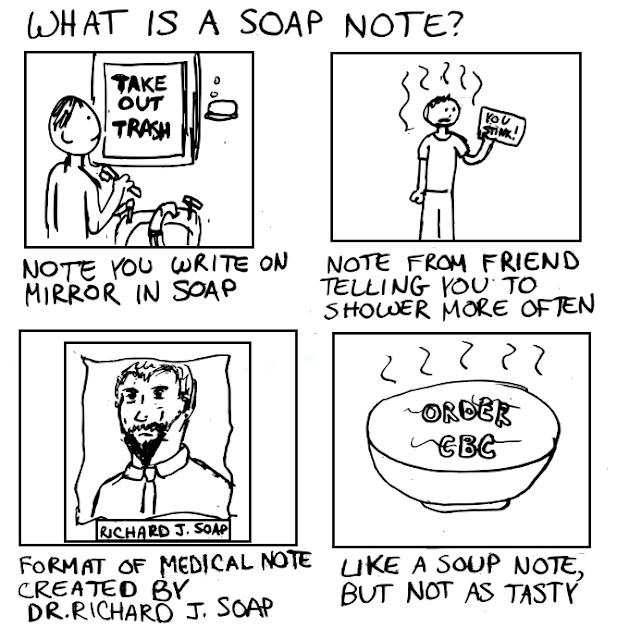 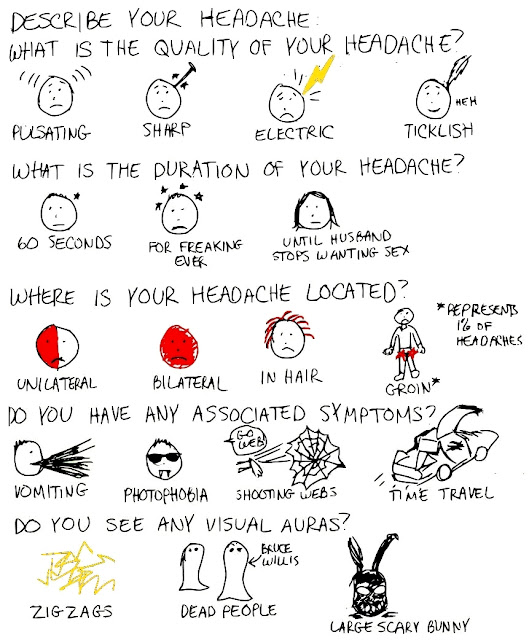 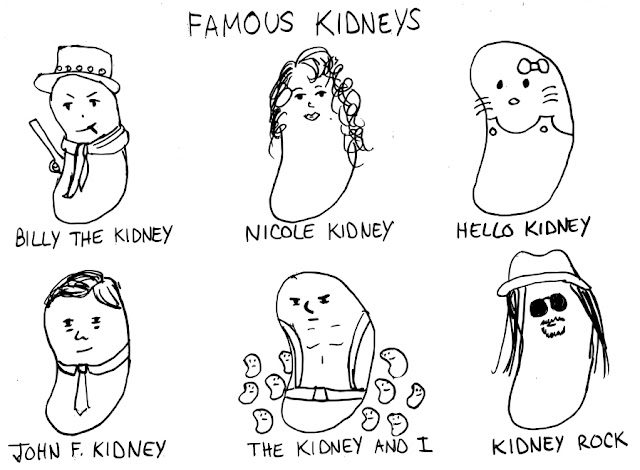 The 8 Types of Med School Professors 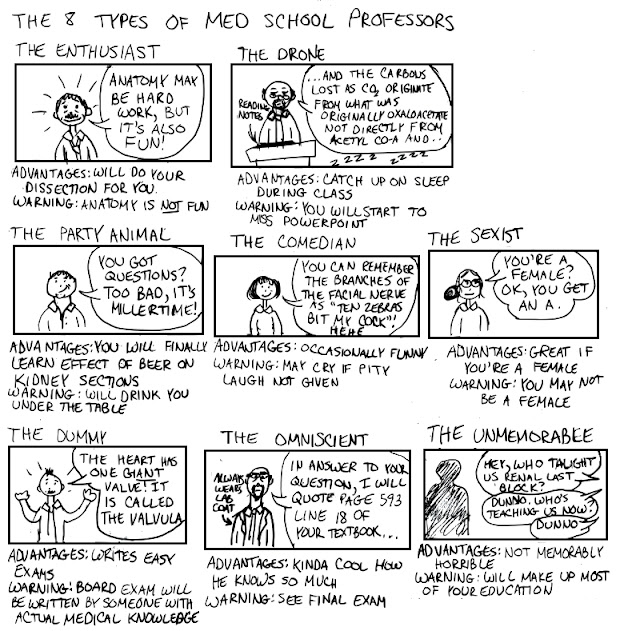 I got the idea from Dr. Grumpy that it's okay to post reruns of older (better) material during the holidays so that I don't have to actually think.  So I'm going to spend the holidays posting some old cartoons, from back in the days when the name of this blog actually meant something... 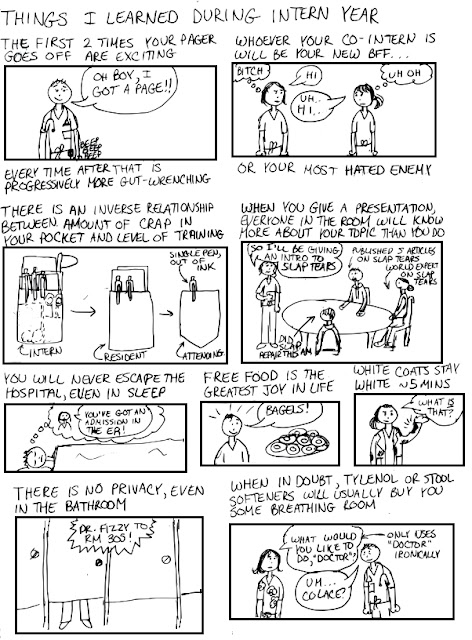 I was recently shopping at Target on a weekday morning, not so much for the holidays but because my underwear and socks are hanging together by threads and I happened to have the day off.

Anyway, a friend of mine called me just as I got to the megastore within the mall, and I put on my handsfree device so we could chat while I shopped.  We were talking while I was comparing two socks I was thinking about buying, when this woman suddenly yelled at me:

"You're being really obnoxious!"

I looked up in total shock.  This middle aged woman was standing in front of me, glaring at me angrily.

I think there was a time when I would have mumbled an apology, but maybe it's just that I'm older or maybe it was my friend on the phone saying, "What the hell?"  Or maybe it was another shopper who was looking at that woman and shaking her head like she couldn't believe it.  But I wasn't going to be yelled at for OMG talking on the phone at a department store.

"So you're saying I'm not allowed to talk at Target?" I shot back.  "So if I had a friend standing next to me, we wouldn't be allowed to speak?"

"That's different," she said. "What you're doing is obnoxious."

"How is it different?" I said.  "Are we all just supposed to shop in absolute silence so that you can concentrate?  Nobody is allowed to talk in this whole store?"

"Look, I'm sorry I said anything," the woman finally said.

I mean, WTF?  I get that there are times when being on your phone would be obnoxious.  Like, if I were on a train, where we were all trapped there, I wouldn't talk on my phone.  But I was at a huge store that was noisy as hell already, and in all likelihood, if she hadn't said something, I would have moved on in about two minutes anyway.  I mean, how long can you spend looking at socks?

I would never consider going up to a complete stranger and criticizing their behavior.  Speaking of obnoxious.
Posted by Fizzy at 3:00 AM 35 comments:

For Christmas, my mother bought my younger daughter a kit of Legos to put together.

Older daughter: "When I get back from basketball, I'll help you put the kit together."

Older daughter: "It's pretty complicated, Mom.  I doubt you'll be able to do it."

It's this the stage where my kid starts thinking I'm a totally incompetent idiot?
Posted by Fizzy at 3:00 AM 4 comments:

I was just catching up on a tv show I watch, Hell's Kitchen.  It's a cooking competition where there's a male and a female team, and they compete against each other until there's one winning chef.

In a previous episode, all the men ganged up against a female contestant, telling her that nobody liked her, and it got her so upset that she got eliminated almost right away, in spite of probably being a decent cook.

On the episode I was just watching, the male contestants were trying to decide "who to bully next." They picked a woman and all decided to target her. One of the guys bragged "this is what I do," and that he couldn't wait to make this woman cry.  The brilliant insults they came up with to target the woman included telling her she had a rat face and calling her Splinter.  (I'm not sure why Splinter was so bad... isn't he like some wise master of ninja?)

The whole thing made me so furious, I could hardly concentrate on the rest of the episode.  I felt so awful that they were targeting this woman to bully, and even though it was within the confines of a stupid competition, that sort of thing does happen all the time in real life.  And of course, then I started getting pissed off about the fact that a man can be a horrible misogynist and bully and still get elected President with lots of women on his side.

There were certainly kids who were mean to me when I was growing up, probably to the point of bullying.  And I never knew how to deal with it... fortunately, it was always self-limited.  But I realized that even as an adult, I don't entirely know how to deal with it.  If someone tried to start bullying me, I think I'd be in trouble.

When my daughter was facing mild bullying at one point in school, we counseled her that they only keep doing it if it bothers you. So the right response is just to say, "Whatever!"  And ignore them. We even practiced saying "whatever."  But easier said than done.

Anyway, in watching Hell's Kitchen, I was really proud of the woman they were attempting to bully.  When they called her "rat face," she actually just laughed and said, "I have a rat face?  Whatever."  (She actually had quite a pretty face.)  And while she did get slightly worked up (it is reality TV), she basically called them on what they were trying to do and walked away with the more intelligent last word.
Posted by Fizzy at 3:00 AM 7 comments:

I was in a meeting last week and I suddenly noticed that I smelled oranges.

Sometimes people snack in our meetings, but I looked around and couldn't see anyone eating oranges or anything that might smell like oranges.

So I started freaking out.  Why was I suddenly smelling oranges?  Was this some sort of weird type of seizure?  Was this the aura for an impending migraine?  Was this the first sign of a brain tumor?  Was it a tumor?

Finally, during a break in the conversation, I nervously commented, "Does anyone else smell oranges?"

"Oh yeah," one woman said.  "I was eating an orange just before I came in."

Apparently, the smell of oranges really clings to you.  Orange smell--worse than glitter?

When I got home from work the other day at around 6:30PM with the kids in the car, there were two giant rectangular boxes taller than I am blocking my garage.

I got out of the car and saw a note from my neighbor (who I've never met).  It said that the boxes were delivered and left in front of our garage by accident and could I please put them in her garage because she's pregnant and can't move them.

First of all, I was not thrilled that I had to get out of my car in the dark and the cold with two cranky kids in the car at the end of a long workday because my garage was blocked by her package. Also, these boxes each easily weighed more than I do.  And I have musculoskeletal issues.  So there was no way in hell I could move these boxes and put them in her garage.  All I could do was knock them over (not gently), and shove them over and out of  the way of my own garage, which was in my case, a feat of superhuman effort.

I was so pissed off. I taped the following note to the package:

I don’t know exactly what you wanted me to do with these boxes but they were completely blocking my garage with both my kids cranky in the car, and all I could do was push them aside to get into the garage.  I could not even close to physically lift them (they probably weigh twice as much as I do) and I have back problems, so I am sorry I could not do anything with them. I know this wasn’t your fault, but please have your husband move them when he gets home.

Thank you very much."

I thought it was a very polite note, considering how angry I was.

Yeah, maybe it wasn't her fault that the boxes were delivered to the wrong place.  But leaving two 100+ pound boxes blocking your neighbor-who-you've-never-met's garage and hoping that they'll just move them for you seems a little rude.  For all she knows, I could be ninety years old.  Was there no other person who she could have called to move them?  Maintenance, perhaps?  A young strapping male passer by?  That's what I would have done. I once got a lifeguard to open a jar of pickles for me. Just leaving them blocking my garage and expecting me to move them seems like not such a neighborly move.  Which wasn't even physically possible for me.

At the very least, she could have left a note saying that she had tried to take care of the situation and that her husband would be home soon to move them.

When my husband finally got home an hour later, the woman's husband was moving the boxes.  I told my husband what happened and he went out to help.  Then my husband informed me that the packages weren't that heavy (I swear, they were) and I overreacted.

Me: "I couldn't move them at all aside from tipping them over."

Obviously, I want you to say I'm right!  Sheesh, is a little blind support too much to hope for?  Do all men do that?

Every time I think I've seen the funniest transcription error ever, I see something like this:

Patient had watery stools coming out of his eyes.