It's been nearly four years.

Four years ago, I published my first novel, The Devil Wears Scrubs.  Now, after four years, here is the sequel, which takes place about 12 years after the original, when Dr. Jane McGill is married with a kid: 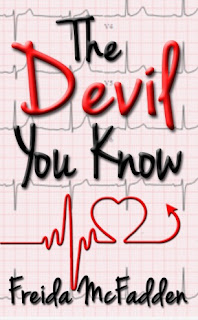 Dr. Jane McGill is in heaven.

She’s got a great job at a VA Hospital, an adorable daughter, and a loving husband. Granted, it would be wonderful if her preschooler wouldn’t wake her up at three in the morning, and it would be a miracle if her husband would change the toilet paper roll once every millennium. Still, in most ways, she has the ideal life she’d always imagined.

Then Jane discovers that Dr. Ryan Reilly is the VA’s newest vascular surgeon. Dr. Ryan Reilly, a.k.a. Sexy Surgeon, a.k.a. the biggest jerk she ever loved.

A decade ago, Jane broke up with the Sexy Surgeon to marry the Nice Software Engineer, but as cracks and crevices appear in her marriage, she can’t help but wonder what life would have been like if she’d made a different choice. Or if it isn’t too late to change her mind…

Or read an excerpt first!

At the end of my first month of intern year, I kept a pile of signout cards with all my patients' diagnoses on it.  This was my list of diagnoses for a month at a county hospital:

(Note that no non-standard abbreviations are used above :)
Posted by Fizzy at 2:30 AM 6 comments:

During my Medicine rotations during med school and also during my Medicine intern year, we had four days off per month.  I believe that's the minimum that residencies are forced to provide.

Maybe this makes me a delicate little snowflake, but I think 4 days off per month is nowhere near enough.  Especially when the other 26-27 days of the month, you are waking up super early, leaving super late, and sometimes spending the night in the hospital.  I remember one resident said she got a simple cold and it lasted for two months because she was so overworked that she couldn't shake it.

Is it any wonder residents are so burned out?

There was one month during internship when I was feeling really depressed and burned out, and I was going into a stretch of working nearly two weeks nonstop with two overnights wedged in there.  I asked my lovely (not) senior resident if there was any way I could have even a half day off in there.  In retrospect, I'm embarrassed I asked because the answer was so obviously no.  She let me have it: "If you get a day off, that means someone else has to cover for you!"

The solution, in my mind, is that we need to train more physicians so the ones we have aren't so overworked and miserable.  Yet I doubt that the four days off per month policy will ever change.
Posted by Fizzy at 3:00 AM 7 comments:

One of the hard things about going from my pre-clinical years in med school to working on the wards was getting used to all the freaking abbreviations.  I remember my first medicine signout sheet looked like gibberish to me.

These days, I'd like to think I know MOST medical abbreviations.  But sometimes I'll get a discharge summary on a patient that makes me think that whoever dictated it got a little too abbreviation-happy.

These are all from a recent discharge summary:

I literally had no idea what any of these things meant.  Is it just me?
Posted by Fizzy at 3:00 AM 10 comments:

From a recent dictation:

"He hasn't had a left thigh laceration which were featured by ophthalmology."

Really?  I understand that Dragon isn't the greatest, but if you're going to produce notes that say things like that, what's the point of even writing a note?
Posted by Fizzy at 3:00 AM 3 comments:

The literal price of health care

Recently my daughter sprained her ankle. Because she's a bit of a drama queen, I took her to urgent care after she refused to put weight on it for a day. The x-ray didn't show a fracture and they gave her a crutch and an Aircast, which she used for exactly one day before she was better.

A couple of months later, I got a bill for $150 for the crutch and aircast that we barely used.

Because of large deductibles and other reasons, we end up paying a lot of our outpatient healthcare expenses out of pocket. But the problem with that is that you have no idea what you're going to pay until the bill actually arrives. If they had told me it was going to be $150 for that stuff, I never would've taken it.

Think about how crazy it is. You would never go to a furniture store, buy a sofa, and just wait a few months until the bill comes to see how much you ended up paying for it. But that's what I'm constantly doing with my healthcare bills.

I can give multiple other examples. Recently, my own doctor ordered a lab test which I didn't think was entirely necessary, but I decided to let them get it anyway. The test ended up costing a shocking $300. I never ever would've approved it if I had any idea it would cost that much. And the clinician has no idea what these things cost, so no help there.

Fortunately for me, $300 won't break me. But there are plenty of families out there for whom $300 is a substantial chunk of money. They may go to the doctor and blindly accept any recommendations and then end up with a gigantic bill.

The solution? I'm not sure. We don't want people to forgo important task because they're expensive. But I also think that people have a right to know what they're paying before the bill comes in the mail.
Posted by Fizzy at 2:30 AM 11 comments:

With a child reaching her tween years, my husband and I have been worrying more and more about what to do about monitoring internet and phone use.

I have friends who say they have passwords for all their kids' Facebook/email/whatever accounts and check them either nightly or at least periodically.  But my husband feels that this is an invasion of privacy and she'll find a way to circumvent it.  We should just educate and trust her.

I'm not sure.  I feel like there are a lot of creeps out there on the internet.  But at the same time, it seems impossible to be able to monitor everything.

I was listening to another doctor dictate a physical exam yesterday and I heard the following:

Me: "did you just dictate that the patient has a butt nose??"

Doctor: "No. I said the patient didn't know the year, but knows the month."