So I recently moved and have had to go through the process of meeting all new people again.

I am constantly approaching new parents at the playground and introducing myself, but I still feel like I am begging when I try to make a play date. It’s especially hard for me because I am not naturally outgoing.

Has anyone gone through this process recently? It’s really depressing to have to start over again.
Posted by Fizzy at 2:00 AM 9 comments:

I was recently advocating for a young patient who had been hit by a car to get more time in rehab.  I was talking to the insurance company, and the second I got on the line, it was really clear they didn't want to hear anything I had to say.  (Honestly, does it EVER work to advocate on the phone?  Because whenever I talk to anyone, they already know everything in the notes, and they've already decided on a hard no.  And repeating my arguments just ends up with a heated discussion.)

In this case, it was especially frustrating because the patient was, as I said, fairly young and really could have benefited from the extra time.  I said to the reviewer, "It's really a shame he can't get more time because if he had another week, he could get home independently."

The response of the reviewer: "Well, it was a shame he got hit by a car."

I mean, what do you SAY to something like that?  Sometimes I want to say to them that I hope they have a better insurance than the company they work for.
Posted by Fizzy at 2:30 AM 4 comments:

When you've got kids, the tendency is to want to take a million photos of them.  And this can quickly get out of hand.

So since my younger daughter was born, I've been diligently making a hardcover photo book on Shutterfly every six months, so I have the photos organized.  And the photobooks are so small, so far they only take up a quarter of a shelf in my bookcase.

Lately, I've been noticing Shutterfly gives you more and more options when you make a photo album.  Like you have the option to have pages that lay flat or a special cover or whatever.  But this time, there was a new option that sort of pissed me off: 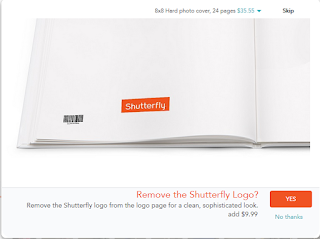 Basically, they are giving you the option to remove their crappy logo from the book and it costs TEN DOLLARS.  To remove a tiny logo.  I like how they mention that without their logo, the book has a "clean, sophisticated look."
Posted by Fizzy at 7:27 AM 1 comment: