Two posts two days in a row??  What's going on!

But I need help!

Thanksgiving is next week.  And I'm not gonna lie, one of my favorite things is Stovetop Stuffing.  I will eat it all year round.  Usually I buy it in the canister and eat it over the course of a month or so.

Recently, I moved to a new town, and they don't have the canister at the grocery stores.  So I got the box, which is also fine usually.  Except when I made it, it tasted awful.  It tasted like mushy bread with no seasoning.

That was the chicken flavored stuffing, so I then bought a box of savory herb stuffing, thinking that might taste better.  It was not.

Now it said it was savory herb, but here is a sampling of stuffing from the box.  See if you can spot the ONE herb. It's harder than finding Waldo. It basically just tastes like flavorless chunks of bread. 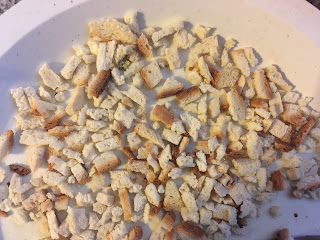