Suicide Med is available now on the Kindle and in paperback! 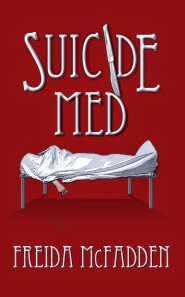 There’s a reason Southside Medical School has been nicknamed “Suicide Med.” For the last six years, every year one student has taken his own life.

Except for last year. Last year was a murder-suicide.

The press has pointed to the heavy workload as the culprit in the high suicide rate. Some students believe that the school is cursed. And others believe that the deaths may not be suicides at all—that it’s no coincidence that Dr. Conlon, Southside’s quirky but beloved anatomy professor, joined the staff on the very year that the suicides began.

Either way, the same question echoes through the minds of every first year student at Suicide Med:

Who will be next to die?

“I wish I had become a ballet dancer instead.”

I use the back of my forearm to swipe at strands of dark hair that have come loose from the tight bun at the back of my head. The attempt fails and the escaped locks fall back into my field of vision just as my glasses slide down the bridge of my nose. This is getting annoying—I wish I could use my hands to clear my vision. Unfortunately, my hands are clad in two pairs of latex gloves that are covered in preserved bits of Agatha’s insides. Agatha is dead.

“Or maybe a figure skater…”

I try to tune out the ramblings of my lab partner, Wendy Adams. It seems like Wendy’s irritatingly bubbly voice has been a soundtrack to every dissection I have ever done. It might have been more tolerable if Wendy offered to help. Instead, she sits perched on a stool, intently watching my handiwork. I’m tempted to rub my dirty gloves in Wendy’s face.

“Anything but a doctor,” Wendy concludes.

You’re not a doctor yet, I nearly point out, but I hold my tongue. I need to focus right now and the last thing I want to do is to get drawn into an argument.

It’s close to midnight on a Saturday night, and Wendy and I are the only two medical students in the first-year cadaver lab. I specifically chose this time, because I knew the lab would be quiet and free from any distractions. I was right—all I can see are rows and rows of dead bodies covered in a layer of clear, thick plastic to prevent desiccation; all I can hear is the whir of the fans working above my head. It would have been the perfect studying atmosphere if Wendy hadn’t insisted on coming along.

“I had a dream about Agatha last night,” Wendy says in a hushed voice, even though we’re the only two people in the room.

During the first week of anatomy class, we named our cadaver Agatha. I hadn’t wanted to name her—after all, this had once been a real person who had a real name of her own. But I felt silly voicing my objections, so I stayed quiet as the other members of my lab group tossed around name suggestions. It had eventually come down to Agatha or Medusa. I was relieved when the group settled on Agatha.

Agatha does seem like an appropriate name, somehow. “Agatha” is a frail old woman who has metal rings around her sternum and blood vessels grafted onto her heart. Of course, it’s impossible to know for sure, but I can make an educated guess that Agatha died of heart problems.

I try to imagine what sort of woman would make the decision to dedicate her body to a medical school. After everything I’ve seen this year, I know that’s one thing I myself would never do. The last thing I want is a bunch of snotty twenty-two-year-olds making fun of all my subcutaneous fat.

“Do you want to hear my dream, Lauren?” Wendy asks.

Do I have a choice? “I’m trying to learn the brachial plexus,” I mumble.

“It was so freaky,” Wendy says, shivering under her green scrubs. “I was lying in bed and I saw Agatha walk into my room. Alive. She was wearing this long, fancy dress, but the weird thing was that she had gloves on her hands. Then she told me…” Wendy leans forward, her blue eyes wide, “that she was going to dissect me. That’s when I realized that I was actually on a lab table and I was naked. And my abdomen was—”

“Listen, can we focus, please?” I snap. I don’t want to admit how disturbing Wendy’s dream is, especially in a deserted cadaver lab on a Saturday night. Since I started gross anatomy class, I’ve had many dreams that it was me or a loved one lying on the table before me. “Our final is Monday morning and I don’t want to fail, okay?”

“I’m going to fail anyway,” Wendy sighs. “I just can’t… focus.” She picks up the lab manual and flips through it. “This is like gibberish to me. It’s impossible.”

I hold up the musculocutaneous nerve between my forceps. The nerve is thick and yellow.

“You’re kidding. You want to eat in here?”

When I’m in the anatomy lab, food is the last thing from my mind. The smell of formaldehyde combined with the image of lacerated flesh is enough to kill any appetite I might have had. A few times, I’ve seen one of my classmates popping candy in their mouth and I’m always in awe.

“Of course I wouldn’t eat in here,” Wendy snorts, even though it wouldn’t have been the most ridiculous thing she’s ever done in anatomy lab.

I find it most bizarre that Wendy always applies a fresh coat of make-up just before starting lab. Although the uncomfortable heels Wendy wears to lab are a close second. I always wear sneakers and haven’t put on so much as lipstick in months.

“I’m going to the vending machines,” Wendy says. “You want something?”

Wendy hops off her stool and clip-clops out of the lab. I hear the heavy metal door slam behind me and the room is plunged into complete silence. It’s heavenly. I let out a deep breath I hadn’t even realized I was holding.

Our final exam in anatomy is on Monday. It’s the biggest exam we’ve taken so far in the short course of our medical school career and I want to do well. I’m not as competitive as some of my classmates, but I hope to land a position in a good neurology program when I graduate. As part of our exam, we have to go around this very lab, identifying labeled structures on different cadavers. I have to know every identifiable structure back and forth if I want to do well.

“Now it’s just you and me, Agatha,” I whisper. I add apologetically, “Although I know that’s not your real name.”

I dig my fingers into Agatha’s forearm, attempting to separate the muscles. When I tug on the muscle I’m holding, Agatha’s fingers curl into a partial fist. I shiver slightly.

I hear a loud noise and look up sharply. The door to the anatomy lab is opening slowly. I glance at a clock up at the wall and see that only a few minutes have passed. How could Wendy be back so quickly? The nearest vending machine is all the way across the building and Wendy always takes forever to choose a snack.

I squint through my thick lenses and see the unshaven face of one of my classmates. Wonderful. It’s bad enough that I have to share the lab with Wendy, but now there’s going to be yet another person here to distract me. Still, it’s pointless to get upset about it.

“Come to study?” I ask him, forcing a smile.

He’s dressed in filthy street clothing, which I find odd. Nobody wears anything but scrubs to lab. But he’s dressed in jeans and his hands are shoved deep into the pockets of his dark brown jacket. He walks towards me, his expression blank.

I posed the question because his hair is so damp that it’s plastered to his skull. Then I reason that if it were raining, his jacket would be wet. His hair isn’t wet from rain—it’s sweat. As he approaches me from the other side of the lab table, I see a drop of saltwater trickle down the side of his face.

Before I can complete my sentence, something dark obstructs my vision. I instinctively blink and take a step back. That’s when I realize that there’s a gun pointed at my face.

I feel my knees go weak and my bladder trembles. I grab on to the edge of the table, trying to keep myself upright. I lower my eyes and see Agatha’s mutilated corpse, clearly unable to offer anything in the way of aid. The gun is inches from my forehead and I can feel the heat radiating from it. Why is the gun so hot? What does that mean?

Oh God. I don’t want to die like this. Not here, not now. It can’t end this way. I know I’ve done some bad things in my life, but I’m pretty sure I don’t deserve this…

All I can think about is how pathetic it would be to die in anatomy lab on a Saturday night. The janitor will probably discover my body tomorrow morning. Will he even notice that I’m a medical student and not one of the bodies?

Wendy, where are you? Get your goddamn cheese doodles and come back here!

His eyes are as black and impassive as the barrel of the gun. When he speaks, his voice is flat and toneless: “Do exactly as I say if you don’t want to die.”